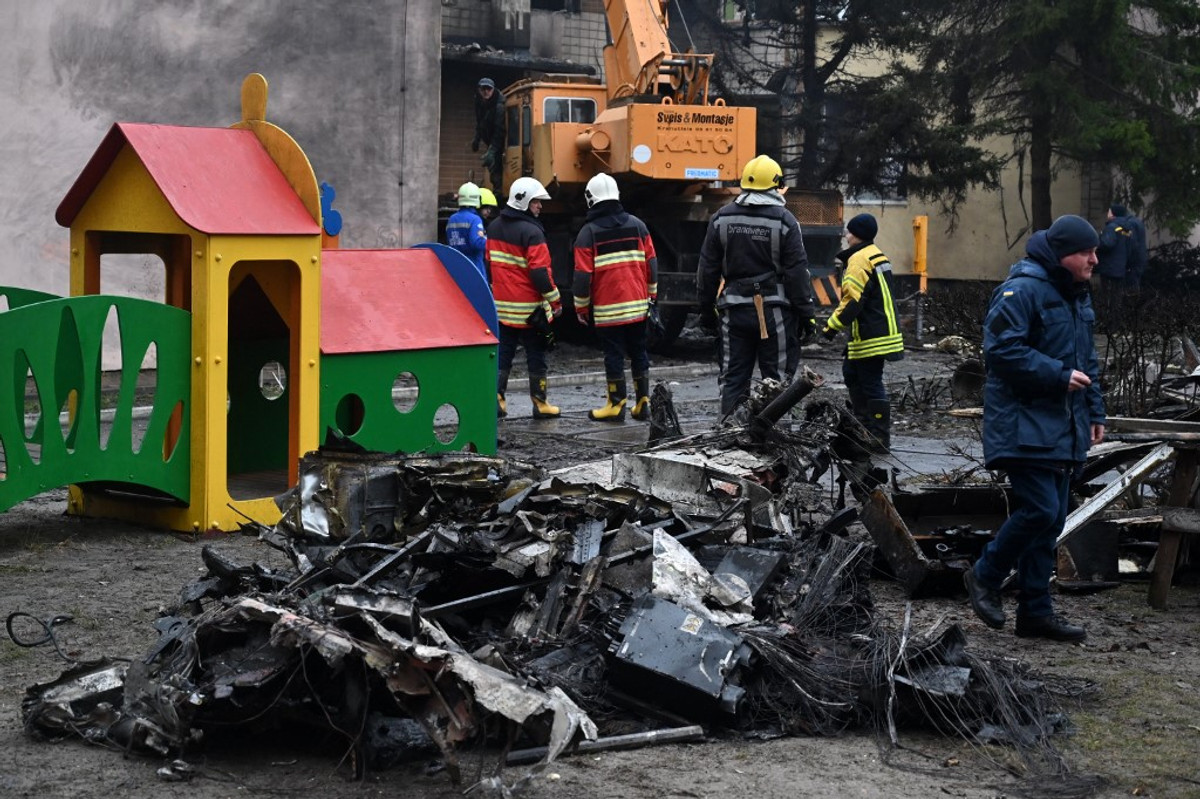 An investigation is underway to establish the cause of a fatal helicopter crash just outside of Kyiv on Wednesday morning, which claimed the lives of 14 people including the Ukrainian interior minister.

“Minister Denys Monastyrsky, Yevhen Yenin and their colleagues who died in the crash are not people who can be easily replaced,” President Zelensky said in his evening address.

“It is a truly huge loss for the state. My condolences to the families.”

Remind me, what happened?

Just after 8 a.m. yesterday, a helicopter crashed next to a kindergarten and a residential building in Brovary, a commuter town around 20 kilometers (12 miles) northeast of Kyiv.

Fourteen people were killed both on the helicopter and on the ground, including Monastyrsky, his deputy, Yevhen Yenin, State Secretary Yuriy Lubkovy and a child, President Zelensky confirmed in his evening address to the nation.

Another 25 people were wounded, including 11 children.

He added that an investigation had been opened “to clarify all the circumstances of the disaster.”

What are the possible causes?

At this early stage, nothing has been ruled out. The Ukrainian security services said they were considering a number of possible causes, including a breach of flight rules, a technical malfunction and sabotage.

Again, it’s not been ruled out but, as yet, no definitive evidence has been provided to support the view that Russia had a hand in the crash.

Ukraine has not claimed direct Russian involvement in the incident, but Zelensky said the tragedy was a consequence of the war.

“There are no accidents at war. These are all war results,” Zelensky said in English, appearing by video link at Davos.

What did he mean by that?

While the rather vague comments could be interpreted as an accusation of sabotage, when it crashed, the helicopter and Ukrainian officials on board were on route to a frontline location – something they wouldn’t have been doing if there was no war.

Speaking on Thursday morning while addressing the Davos summit by videolink, Zelensky was asked whether the crash was an “accident or something more sinister.”

Is there any evidence it was shot down?

Kyiv Post spoke to several eyewitnesses in Brovary who, despite the initial shock and confusion, all described only hearing one explosion.

“No one understood what happened,” said Victor Komisarov, who lives near the kindergarten.

“We thought it was some kind of Russian missile attack until we noticed a helicopter propeller on the house’s entrance that was still burning.”

There was no evidence of missile debris at the scene.

What about the flying conditions on Wednesday morning?

Witnesses told Kyiv Post it was a “foggy morning” and it’s well-known that Ukrainian helicopters travelling towards the frontline fly at very low altitudes in order to avoid detection.

Does the type of helicopter tell us anything?

The helicopter was a Eurocopter EC225 Super Puma which is a non-military aircraft often used by the Ukrainian government to transport officials.

In 2016, a version of the helicopter crashed while ferrying passengers from a Norwegian oil platform, killing all 13 people on board. The cause of the crash was determined to have been due to the main rotor blades separating from the aircraft.

When will we know more?

It could take some time to establish the full facts of the tragedy. Yury Ignat, spokesperson for the Air Force Command of Ukraine’s Armed Forces, said on Wednesday it was “too early” to discuss what was to blame but that a full investigation would be launched.

“The commission will investigate the reasons,” he said. “It won’t be 1-2 days because plane crash research takes a certain amount of time.”

What have Ukraine’s allies said?

President Joe Biden said in a statement it was a “heartbreaking tragedy”, calling Monastyrsky a “reformer and patriot”.

“We don’t have any notion right now as to what caused that crash,” U.S. National Security Council spokesman John Kirby told reporters.

Britain said: “Ukrainians will continue to be collateral [victims] as long as [Russian President Vladimir] Putin continues his needless war.”

Berlin, meanwhile, “offered Germany’s support in identifying the causes of the helicopter crash.”